The Coast to Coast walk is one of the UK’s most iconic long-distance treks. Starting in St. Bees on the Irish Sea and finishing in Robin Hood’s Bay on the North Sea, this incredible journey takes walker’s across Britain. The Coast to Coast route is typically completed in 12 – 16 days, although countless opportunities exist to shorten or lengthen your walk.  This post will introduce you this magnificent trail and provide an overview of the Coast to Coast route as well as provide detailed maps, navigational resources, and much more so you can be sure you’re ready to tackle Wainwright’s most famous trail.

Where is the Coast to Coast walk route?

The Coast to Coast walk traverses Northern England and connects the two seaside villages of St. Bees in the west and Robin Hood’s Bay in the east. In between start and end points, the Coast to Coast visits three National Parks (Lake District, Yorkshire Dales, & the North York Moors) and takes in some of England’s best scenery and friendliest towns. The nearest major city to the traditional start of the walk in St. Bees is Carlisle to the north and Manchester to the south. In Robin Hood’s Bays the nearest  large cities are Middlesbrough in the north and Leeds in the south. 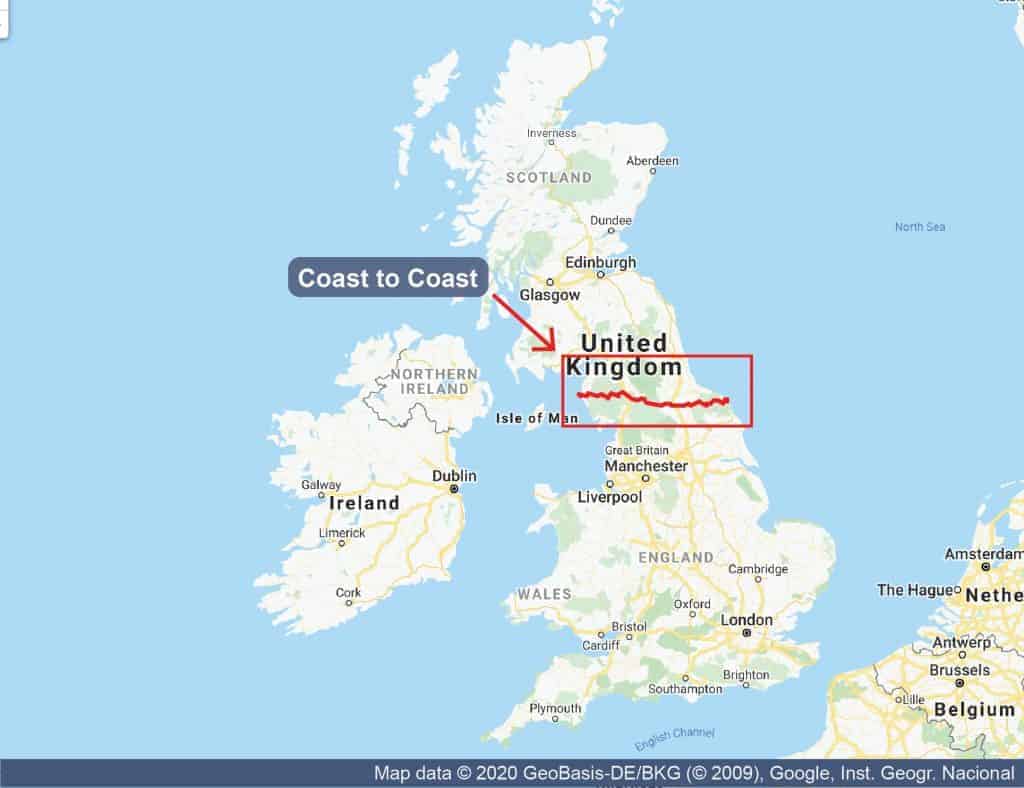 The route visits countless small villages as well as a few larger towns such as Richmond and Kirkby Stephen. You’ll have no problem finding accommodation at any of the stops along the route as plentiful B&Bs, hotels, and campgrounds exist to serve all budgets. The walk is typically completed in 14 stages, although plenty of options exist to extend or reduce your time on the route. The stages of the traditional Coast to Coast walk are as follows:

For a complete C2C accommodation directory, be sure to check out our Accommodation Guide! 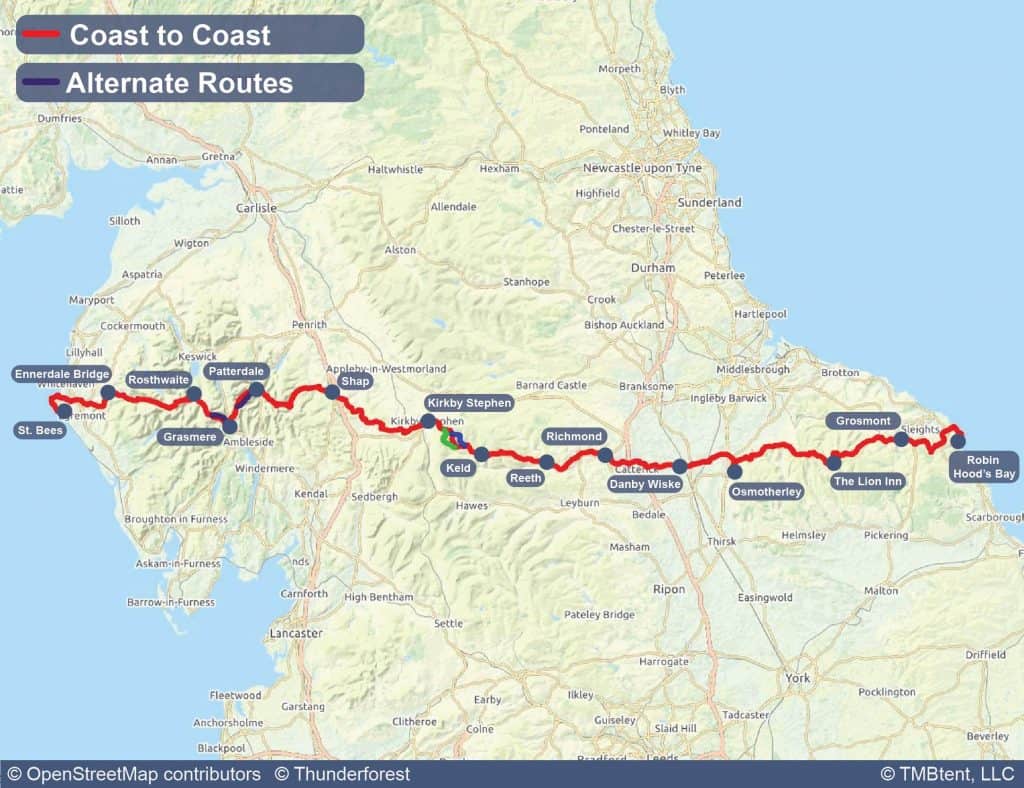 The Coast to Coast route is typically completed in 14 stages.

As mentioned above, and as with many long-distance walks, you’ll have plenty of opportunities to take alternate trails on the Coast to Coast. These variants are more abundant in the Lake District than other sections of the trail and will give walker’s the opportunity to shorten or lengthen their walk depending on their preferred level of difficulty and time allotted. The alternate routes can also be used to add challenge, avoid certain sections, or provide a low-level route in the case of bad weather. In addition, the section of trail between Kirkby Stephen and Keld has three route options that must be taken depending on the time of year. This has been implemented to reduce the environmental impact on this sensitive area and walker’s should be sure to follow the guidelines.

The Coast to Coast walk has several alternate routes that can be taken. 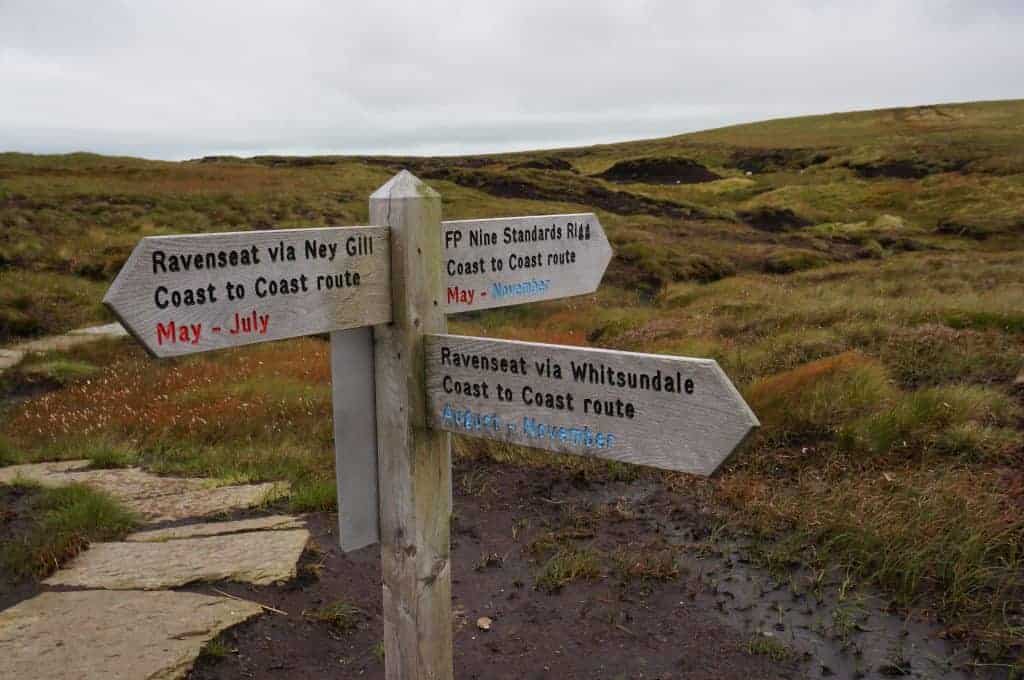 Between Kirkby Stephen and Keld walkers are required to take different routes depending on the time of year.

The interactive Coast to Coast walk map below will allow you to zoom in on the various stages as well as view the traditional stops along the route. The map also displays the common alternate routes that are a part of the Coast to Coast, as described above.

How long is the Coast to Coast walk?

Famously, the Coast to Coast walk is purported to be 192 miles from St. Bees to Robin Hood’s Bay. While this is certainly a close estimate, we measure (via GPS) the Coast to Coast to be 186 miles long for those who stick to the traditional route. For those on the metric system that’s a whopping 300 km!

Of course, measuring the exact distance of the Coast to Coast has little practical value, as walkers will certainly end up walking further than the specific measured distance. The taking of alternate routes, detours, and the occasional jaunt off the trail to visit the local pub will assuredly make the distance actually walked vary from person to person.

Even so, it is helpful to have an idea of the distances of each section of the Coast to Coast, which is exactly what the maps below show. Each map shows the approximate distance of each stage in both miles and kilometres. Note that none of these distances include alternates or variants, and should only be used to get a general idea of distance. 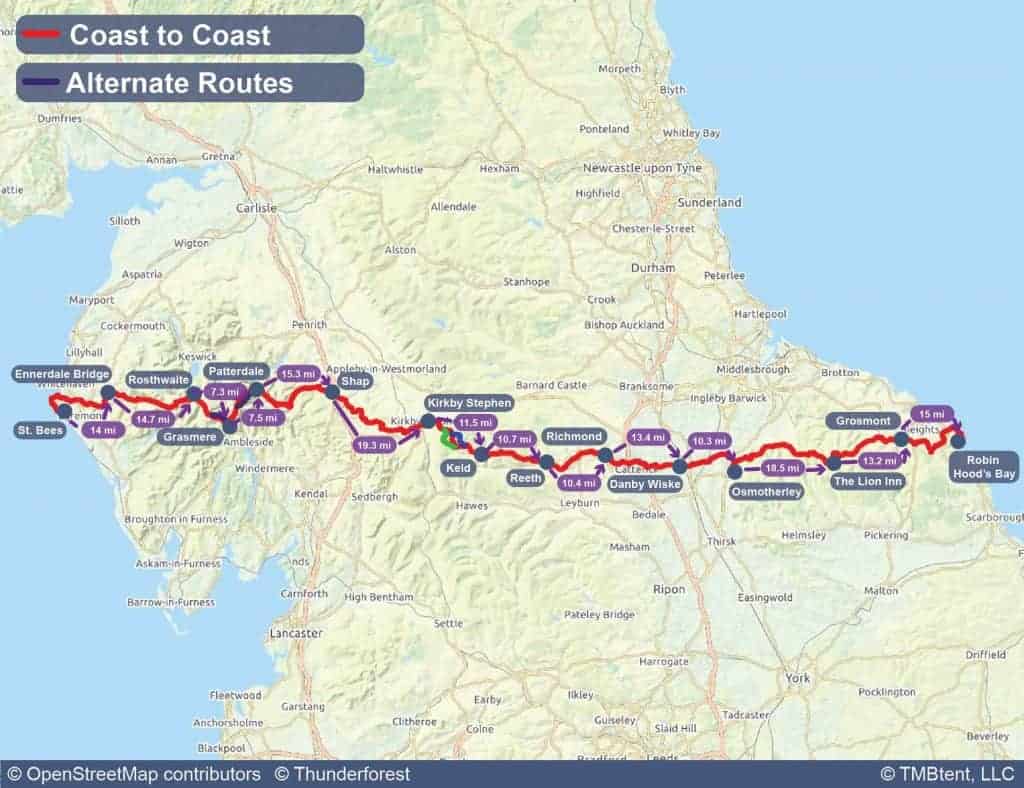 Distances of the various stages of the Coast to Coast walk in miles. 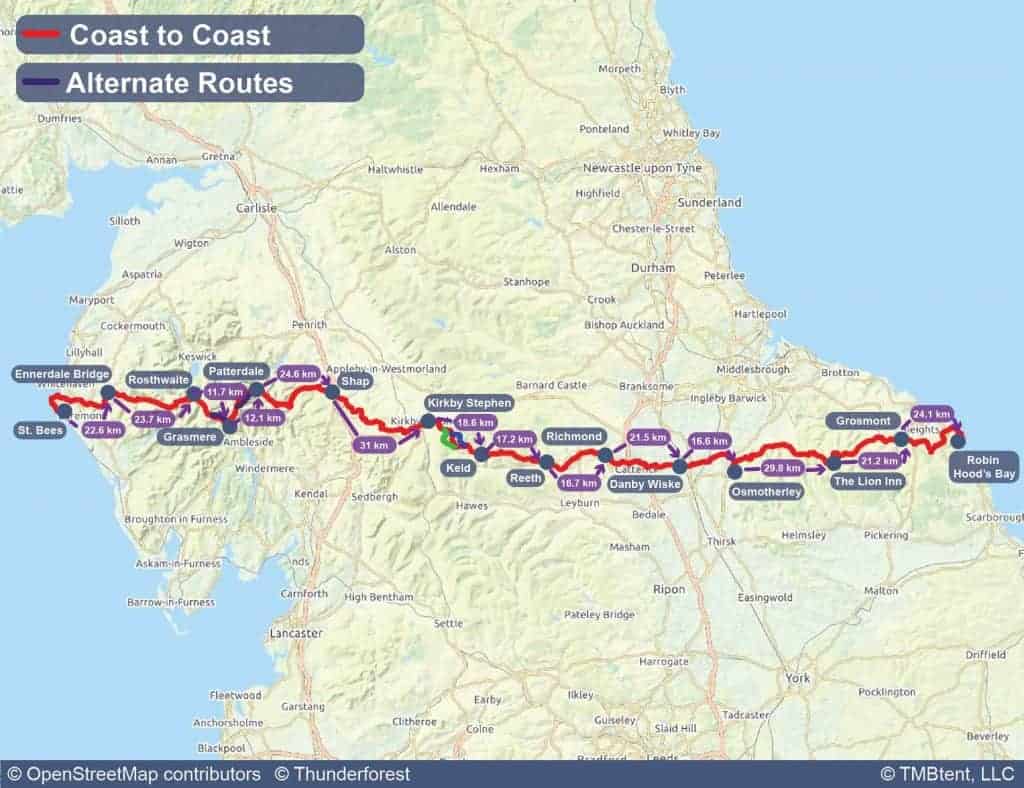 Distances of the various stages of the Coast to Coast walk in kilometres.

What is the elevation profile of the Coast to Coast?

Over the entirety of the Coast to Coast’s 186 (or 192!) miles the trail has approximately 29,000 feet or 8,850 meters of elevation gain! Averaged across the traditional 14 stages this equates to around 2,000 feet of elevation gain each day. That’s nothing to sneeze at!

However, much of that elevation gain is concentrated in the earlier stages of the walk, especially in the Lake District. The high point of the Coast to Coast is Kidsty Pike at 2,559 feet above sea level, located on the eastern edge of the Lake District. Given that the Coast to Coast starts and finished at the sea you’ll at least have the solace in knowing that for every uphill section you’ll have an equally downhill section at some point! 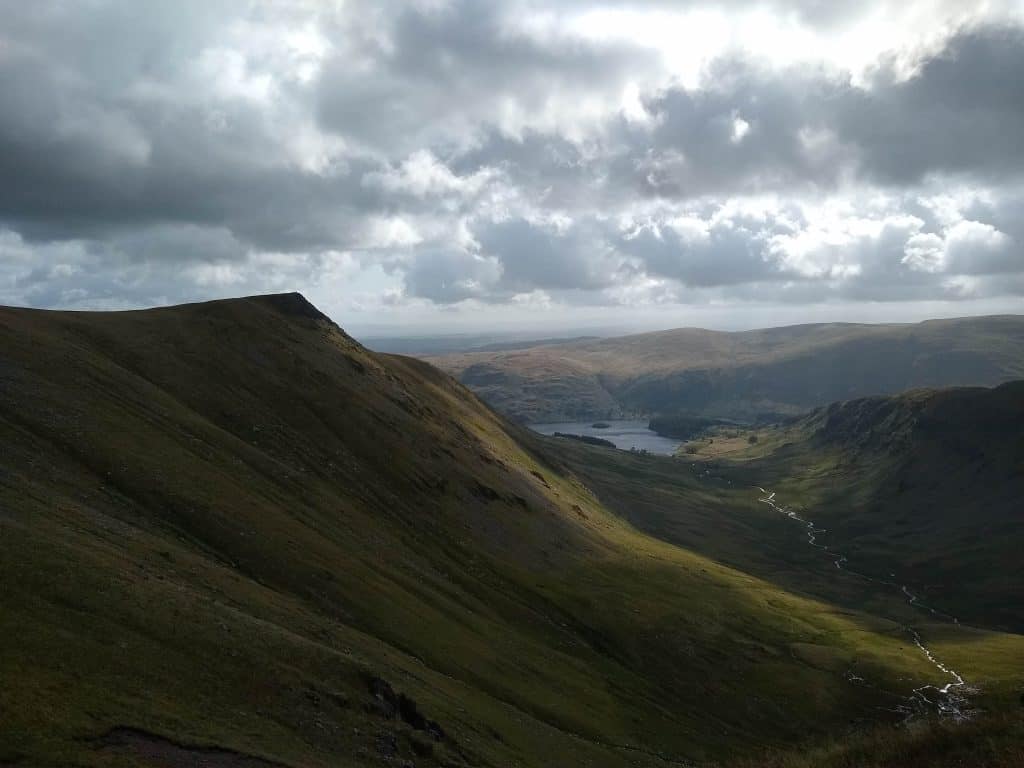 Kidsty Pike is the high point on the Coast to Coast walk.

The elevation profiles below, displayed in both imperial and metric units, will give you an overview of what each stage of the Coast to Coast Route is like in terms of total elevation change and distance. Elevation is shown on the left side while distance is shown on the bottom. Each blue dot represents a stop along the traditional 14-stage walk, with the stop name shown at the top.

When thinking about how many days or stages you’ll take to complete the Coast to Coast be sure to reference these elevation profiles. They’ll give you a sense of how hard each day is and will let you see which stages may make sense to combine or split up on your walk. 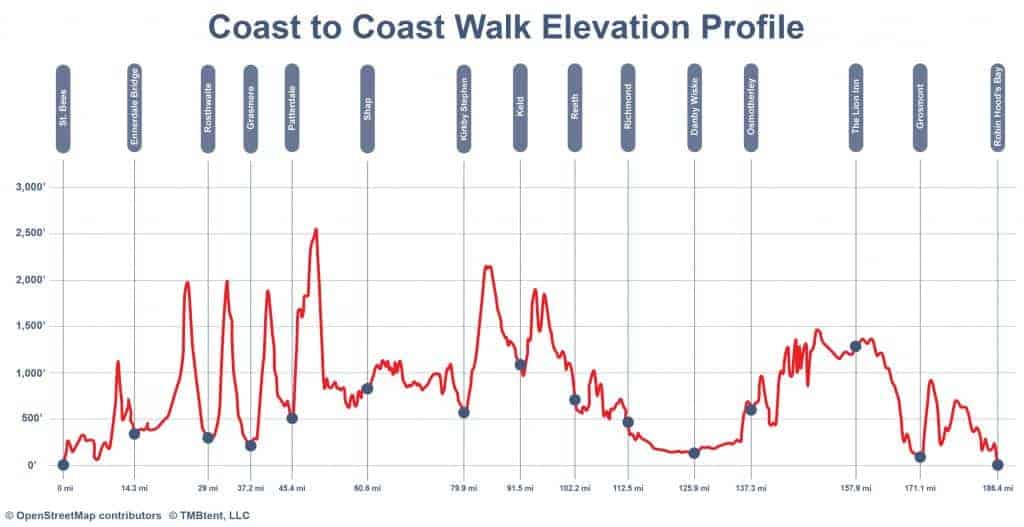 Elevation profile for the Coast to Coast walk in miles and feet. 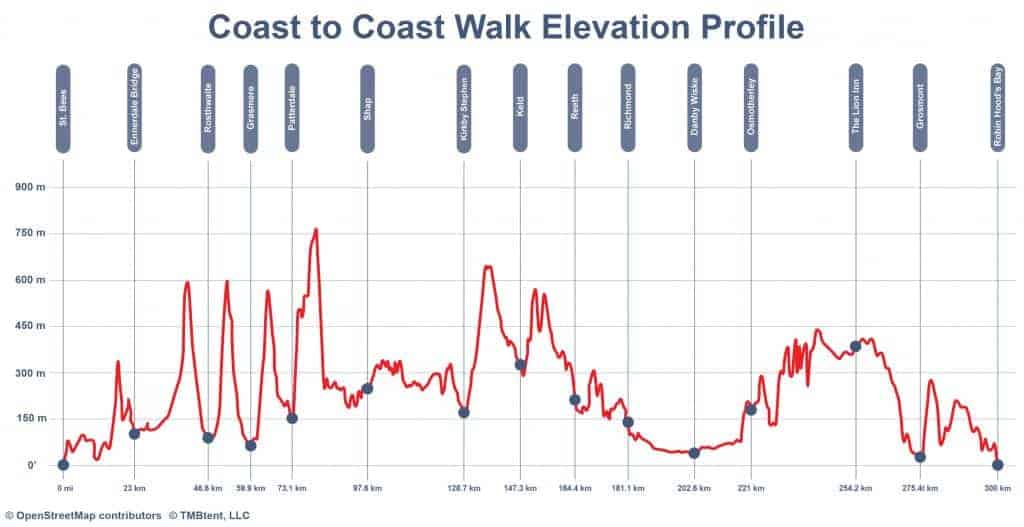 Elevation profile for the Coast to Coast walk in kilometers and meters.

Which maps should I carry on the Coast to Coast walk?

Given that the Coast to Coast is not a National Trail in the UK, you won’t find the usual trail signs giving clear direction at every turn. Rather, the Coast to Coast is often very poorly marked and can be difficult to navigate on. For that reason we highly recommend that every walker have some sort of map (digital or paper, preferably both) that they bring with them on their Coast to Coast trek.

When we walked Wainwright’s Coast to Coast we did not utilize paper maps, other than those included in our guidebook. Instead we utilized downloadable GPS maps on our phones to ensure we knew where the trail was as well as where our next stop was. Given that cell phone service can be spotty along the route, especially in the Lake District, it is critical to have a good offline mapping app, such as Gaia GPS, to ensure you’ll be able to access your location.

If you’re interested in utilizing this method of navigating as well you can purchase the GPS files needed for the Coast to Coast walk in the section below.

Even with the convenience of GPS navigation, we still recommend carrying a paper map, or map booklet for the Coast to Coast. This will provide a bit of insurance should that trusty phone of yours get dropped in a puddle or soaked in one of the many downpours you’ll surely encounter.

You can purchase this map booklet here.

If instead you’d like to carry full size Ordnance Survey maps for the entire Coast to Coast you’ll need the following OS maps:

Lucky for you, the complete set of the maps above is available for purchase in a set here.

If you do plan to carry paper maps, a weatherproof carrying case like this one wouldn’t hurt to have either.

If you’re interested in getting access to the GPS data used to create all of the maps in this post, we are happy to offer our Coast to Coast walk GPX files for only $4.99. When you download the GPX file, you’ll get route data for each of the traditional stages of the Coast to Coast route as well as all of the common alternate route, plus way-points for each stop along the way.

As mentioned above we utilized offline downloadable GPS maps on our smartphones to navigate while walking the Coast to Coast. This is a great way to navigate on the trail as it allows you to see your progress for the day and also doesn’t require a cell phone signal (which you likely won’t have) to display the map. Our Coast to Coast Offline Mapping post has all the information you need to get set up using an app for your map. This step-by-step article will teach you how to quickly and easily turn your phone into a GPS device. 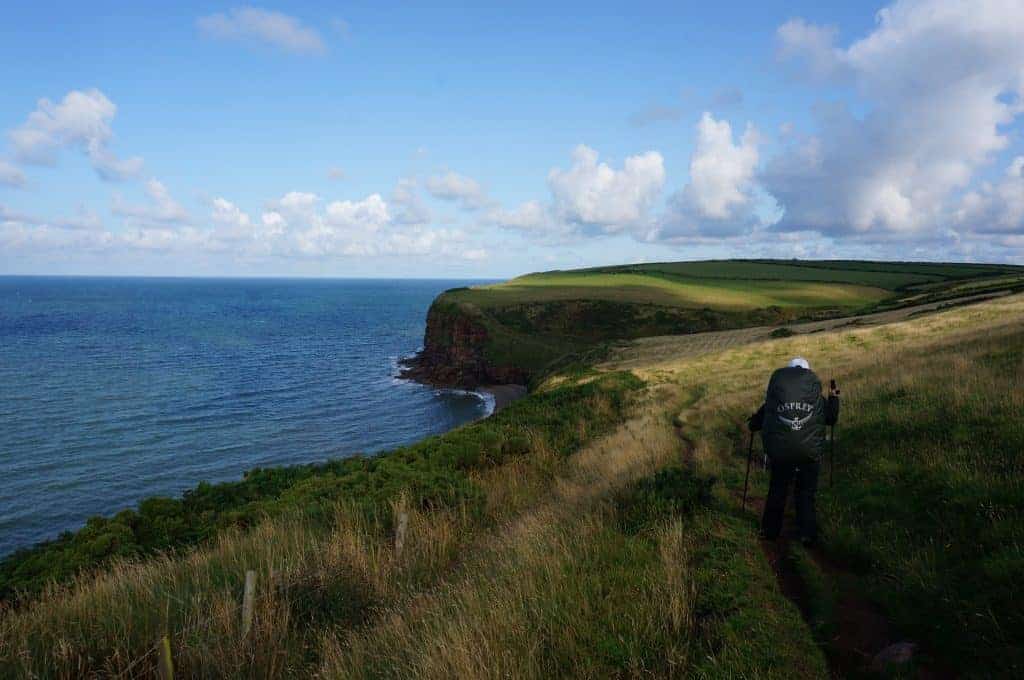 Check out our other great Coast to Coast Walk Resources:

Guide to Camping on the Walker's Haute Route