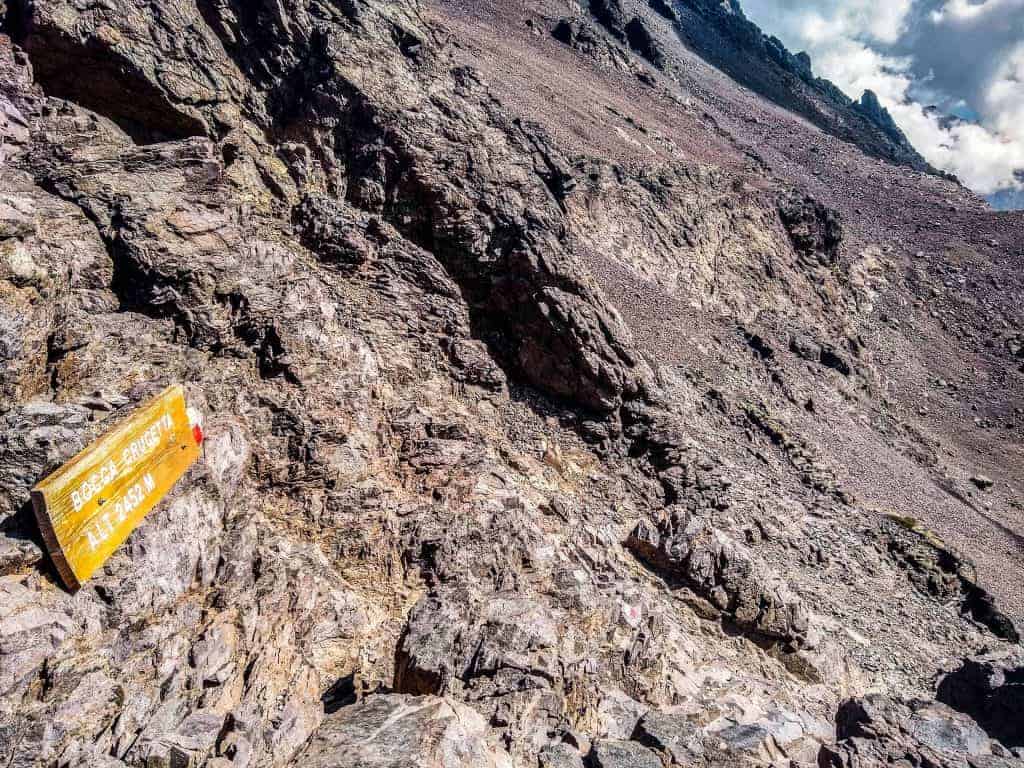 The GR20 takes hikers on a spectacular trail across the island of Corsica and is one of the most renowned long-distance treks in the world. The route is broken into 16 stages and is traditionally walked from north to south, starting in the town of Calenzana and finishing in the little village of Conca. This post give you all of the GR20  resources you need to familiarize yourself with the GR20 map, route, location, and all other things navigational so you can be sure you’re ready to take on this incredible trail!

The GR20 is located on the semi-autonomous French island of Corsica. Corsica sits in the Mediterranean Sea off the coasts of both France and Italy and just north of the island of Sardinia. GR20 hikers are likely to pass through at least one of the major towns in Corsica en route to and from the trail. These towns include Bastia, Calvi, Ajaccio, and Porto Vecchio. 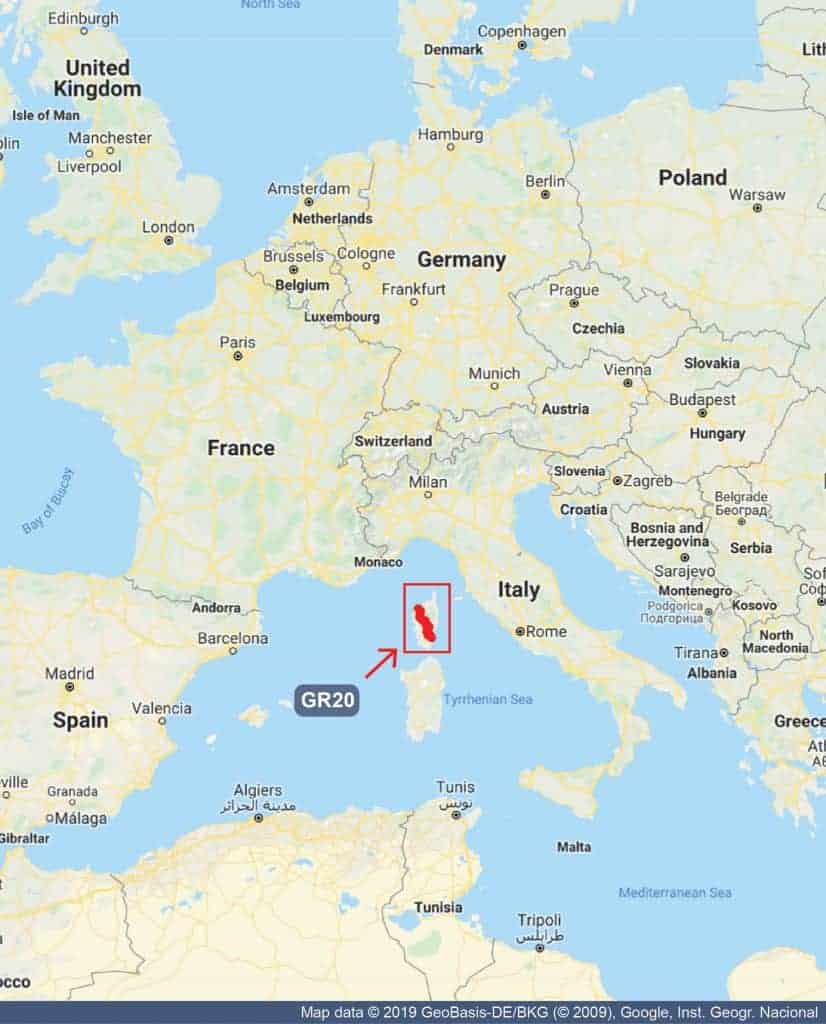 The GR20 takes trekkers across Corsica.

Many trekkers are surprised to find that the GR20 visits very few Corsican towns along its route, instead staying high in the mountains and stopping mainly at mountain refuges and bergeries (former shepherds’ huts). However, the GR20 does pass through the town of Vizzavona, which is the approximate halfway point of the trek.

Given this fact, many hikers will want to add a few days to their itinerary, if possible, to ensure they are able to visit some of the beautiful towns and villages in Corsica.

The stages for the traditional north to south route of the GR20 are as follows: 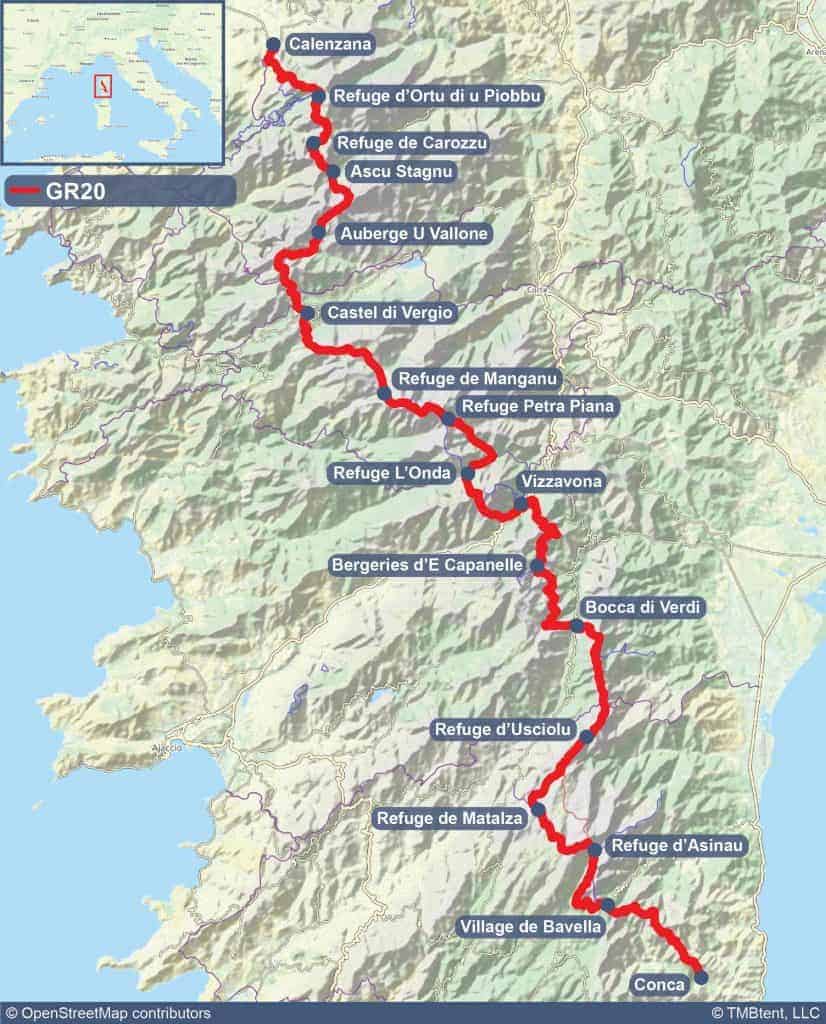 The GR20 take trekkers across the island of Corsica.

In addition to the traditional route, the GR20 also includes several ‘alternates’. These trails connect the same start and finish points, but take walkers on a different route between the two points. These alternate routes can be used to add challenge, visit nearby summits, avoid certain sections, or provide a low-level route in the case of bad weather. Additionally, there is an alternate route that allows trekkers to skip an entire stage of the GR20 by going directly from Refuge d’Uscioulu to Refuge d’Asinau.

Here are the common alternate routes on the GR20, which are also shown on the map below: 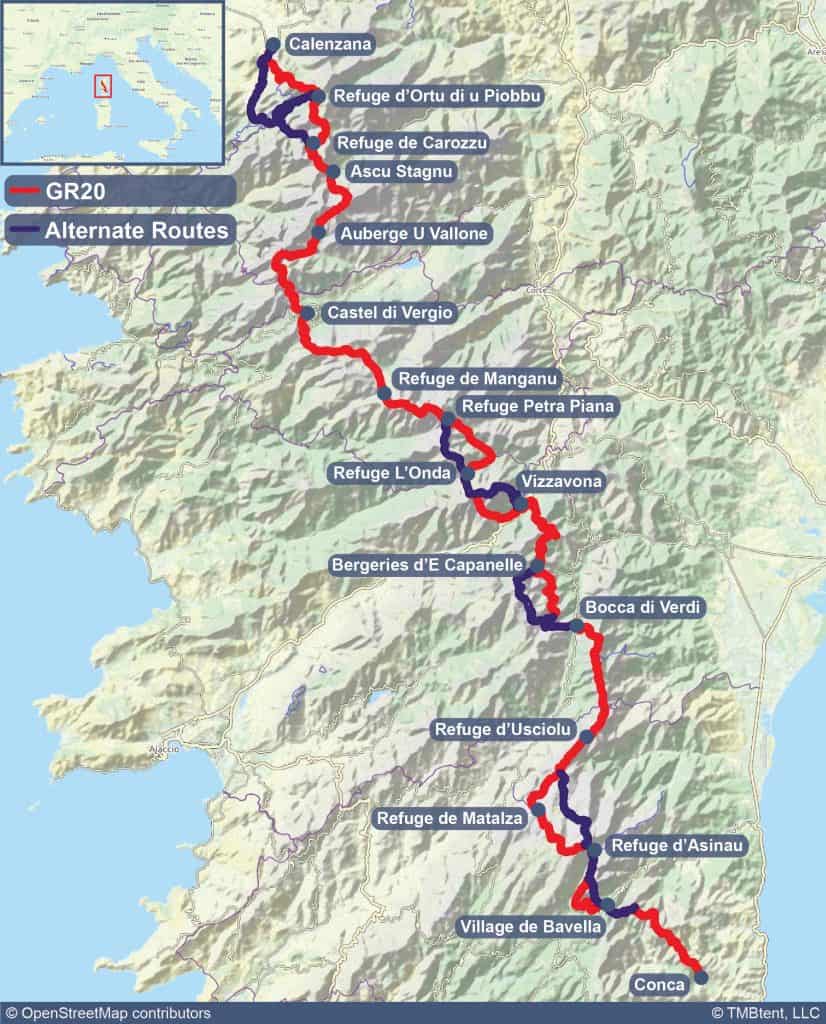 The GR20 also includes many alternate routes, shown in the map above.

The interactive GR20 map below will allow you to zoom in on the various stages as well as view the traditional stops along the route. The map also displays the common alternate routes that are a part of the GR20. You can click on each stage to see its total length, listed in both kilometers and miles.

The GR20 is approximately 113 miles or 182 kilometers long. This is based on following the traditional route and not taking any of the alternates. Of course, many trekkers will opt to take several of the alternate routes, which will lengthen or shorten the total distance, depending on the routes chosen. You’ll have the option to walk less or more depending on the weather, your preferences, and the conditions encountered on the trail.

The maps below show the approximate distance of each stage in both miles and kilometers, giving you a sense of the distances encountered on each section of the GR20. For more detail on each stage be sure to check out our interactive map in the section above! 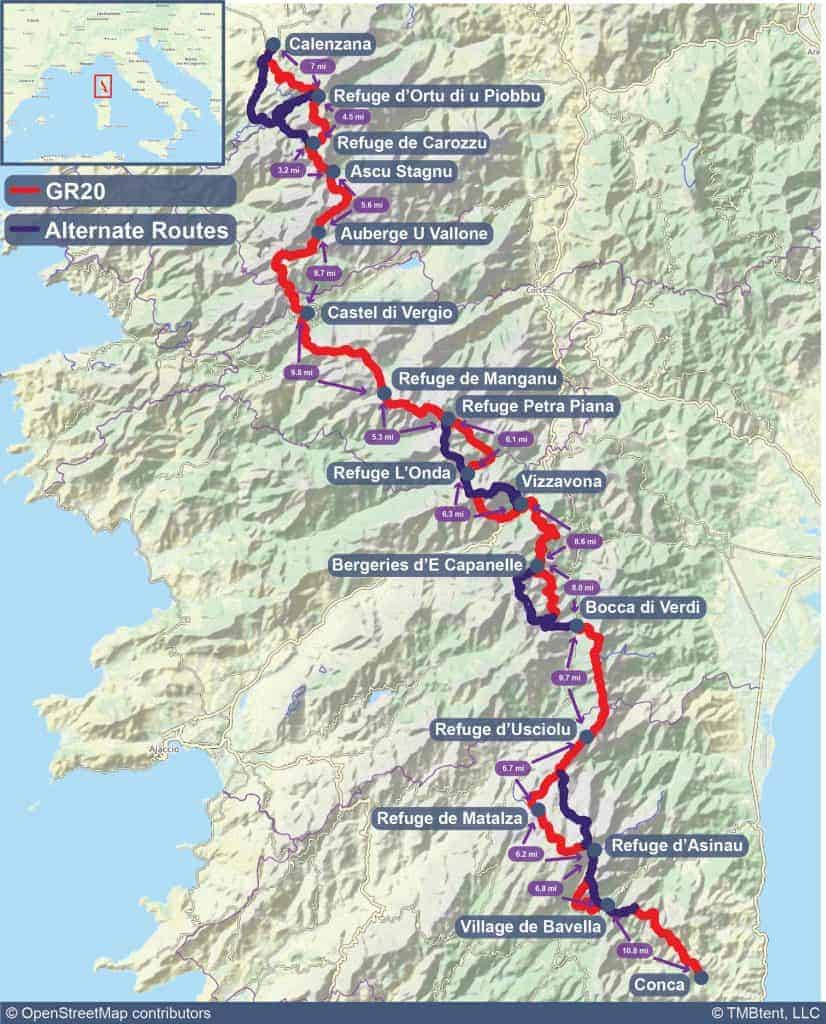 Approximate stage distances of the GR20 in miles. 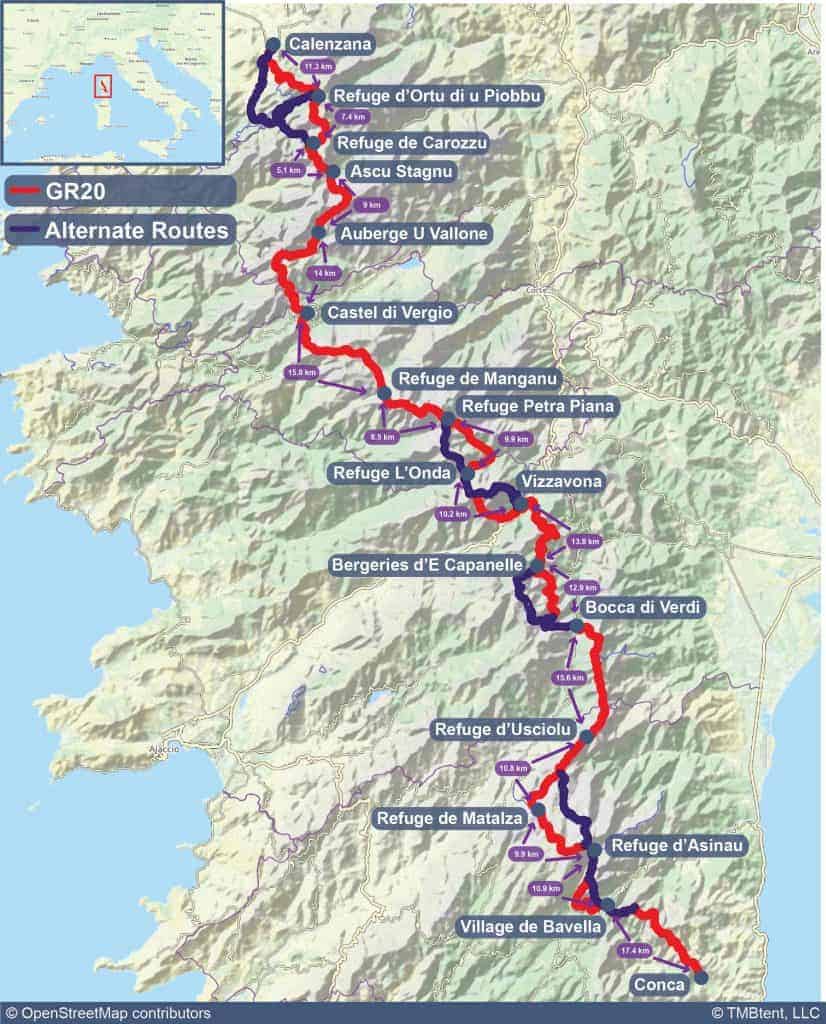 Approximate stage distances of the GR20 in kilometers.

What is the elevation profile of the GR20?

Of course, the elevation gain and loss isn’t spread out evenly from stage to stage. You’ll have days with a tremendous amount of climbing and you’ll also have days with much less (although always some!). Given that the GR20 is a point to point trail (meaning it does not start and finish in the same location) you’ll lose a tad more elevation that you’ll gain over the course of the entire route.

The elevation profiles below, displayed in both imperial and metric units, will give you an overview of what each stage of the GR20 is like in terms of total elevation change and distance. Elevation is shown on the left side while distance is shown on the bottom. Each blue dot represents a stop along the traditional 16-stage GR20 route, with the stop name shown at the top.

When thinking about how many days or stages you’ll take to complete the GR20 be sure to reference these elevation profiles. They’ll give you a sense of how hard each day is and will let you see which stages may make sense to combine 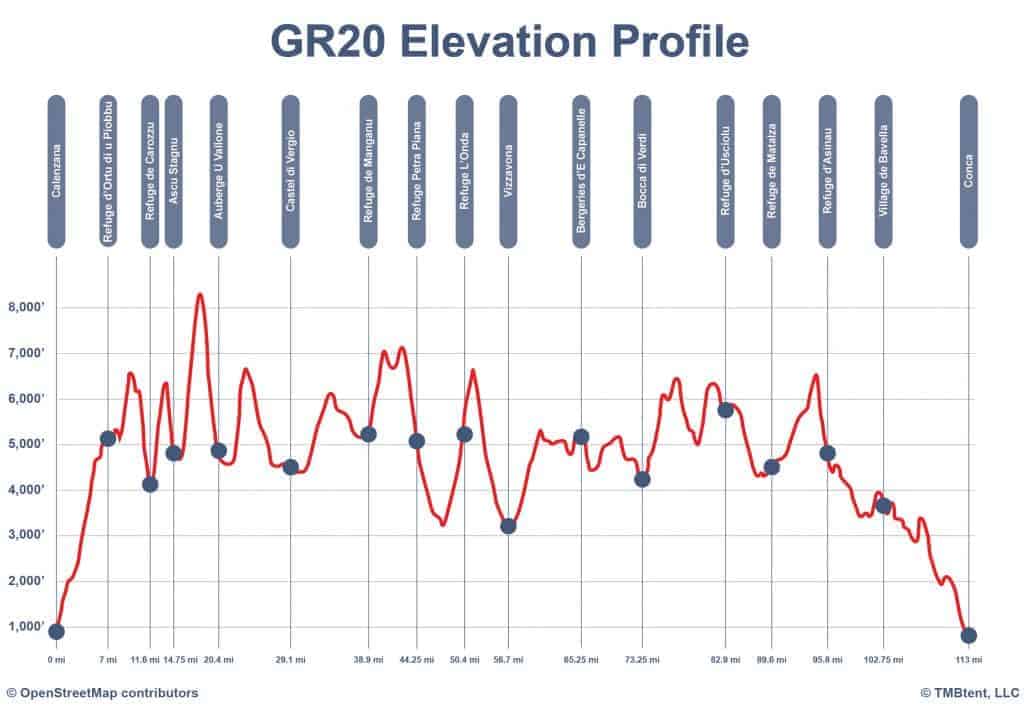 Elevation profile of the GR20 in feet and miles. 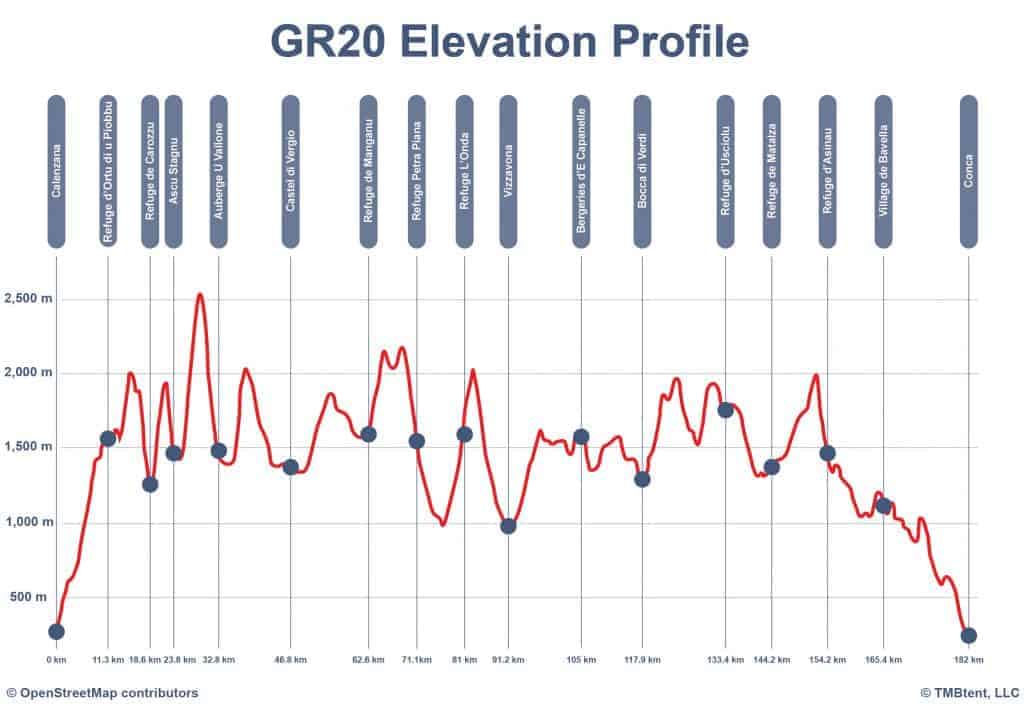 Elevation profile of the GR20 in meters and kilometers.

Which maps should I carry on the GR20?

The GR20 is the best marked trail we’ve ever hiked. The notorious red and white paint flashes guide the way through gullies, across boulder fields, and past mountain peaks. The saying on the GR20 is that if you’ve gone more than 20 feet without seeing marker you’re probably off the trail, and this is true! However, it can still be easy to get turned around, mixed up, and generally off the main trail in some capacity. You may find yourself walking in an early morning mist, struggling to look up to find a trail marker with the blazing sun, or simply have missed the last trail junction. For this reason we highly recommend that all trekkers have some form of wayfinding for the GR20.

When we hiked the GR20 we did not rely on traditional, paper maps that are available for the route. Instead, we preferred utilizing GPS maps on our phones to ensure we knew where the trail was as well as where we were in relation to it. Cell phone service is very limited along the GR20, so it is critical to have a good offline mapping app such as Gaia GPS to ensure you’ll be able to view the map at any point along the route.

With all this considered, we still recommend carrying a paper map, or map booklet. While technology has done a tremendous amount to make navigating while hiking easier, there is simply no replacement for carrying a physical map with you. If your phone runs out of battery or you drop it in one of the many swimming holes along the GR20 you’ll be glad you had your handy paper map to rely on.

To cover the entire GR20 at a good scale (1:25,000) we recommend bringing the following IGN maps:

. A weatherproof carrying case like this one wouldn’t hurt to have either.

If you’re interested in getting access to the GPS data used to create all of the maps in this post, we are happy to offer our GR20 GPX files for only $4.99. When you download the GPX file, you’ll get route data for each of the traditional stages of the GR20 as well as all of the common alternate route, plus waypoints for each stop along the way.

As mentioned above we utilized offline downloadable GPS maps on our smartphones to navigate while hiking the GR20. This is a great way to navigate on the trail as it allows you to see your progress for the day and also doesn’t require a cell phone signal (which you likely won’t have) to display the map. Our GR20 Offline Mapping post has all the information you need to get set up using an app for your GR20 map. This step-by-step article will teach you how to quickly and easily turn your phone into a GPS device.

Check out all of our great GR20 resources: