The Walker’s Haute Route is an incredible trail that connects the two iconic mountain towns of Chamonix in France and Zermatt in Switzerland. The trek traverses some of the best scenery in the Alps and is often included on list of the best hikes in the world. The route has many iterations, as you’ll see below, but is traditionally broken into 13 stages.

This post will provide you with an overview of the route and tons of mapping resources to familiarize yourself with the Walker’s Haute Route map, route, location, and elevation profile so you can be sure you are ready to take on this incredible adventure!

Everything you need to to plan your Haute Route trek – all in one place.

Whether you prefer mountain huts or tents, fastpacking or meandering, luxury, dirtbag or something in between, we’ve got you covered.

From custom itineraries and GPS maps created specifically for you we can help you plan your perfect Walker’s Haute Route adventure!

Our downloadable Guide to the Walker’s Haute Route is ultimate resource to help you plan your perfect trip. 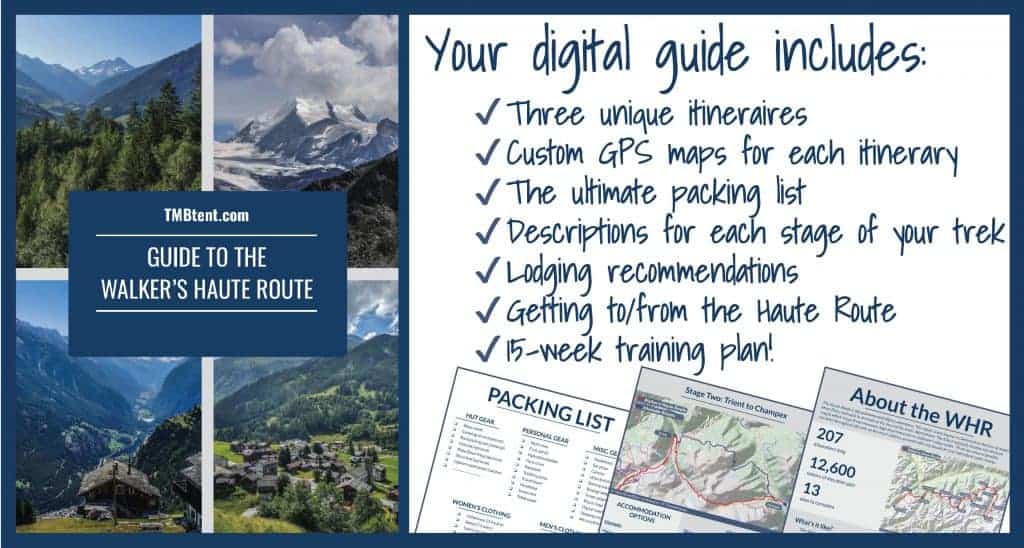 Our 50+ page downloadable guide has everything you need to know to plan your Walker’s Haute Route adventure. From three unique itineraries with custom GPS data to a full training plan, our guide is the quintessential handbook for trekking this incredible trail. Each section provides in-depth information and resources, including:

Get your digital guide today and start planning! 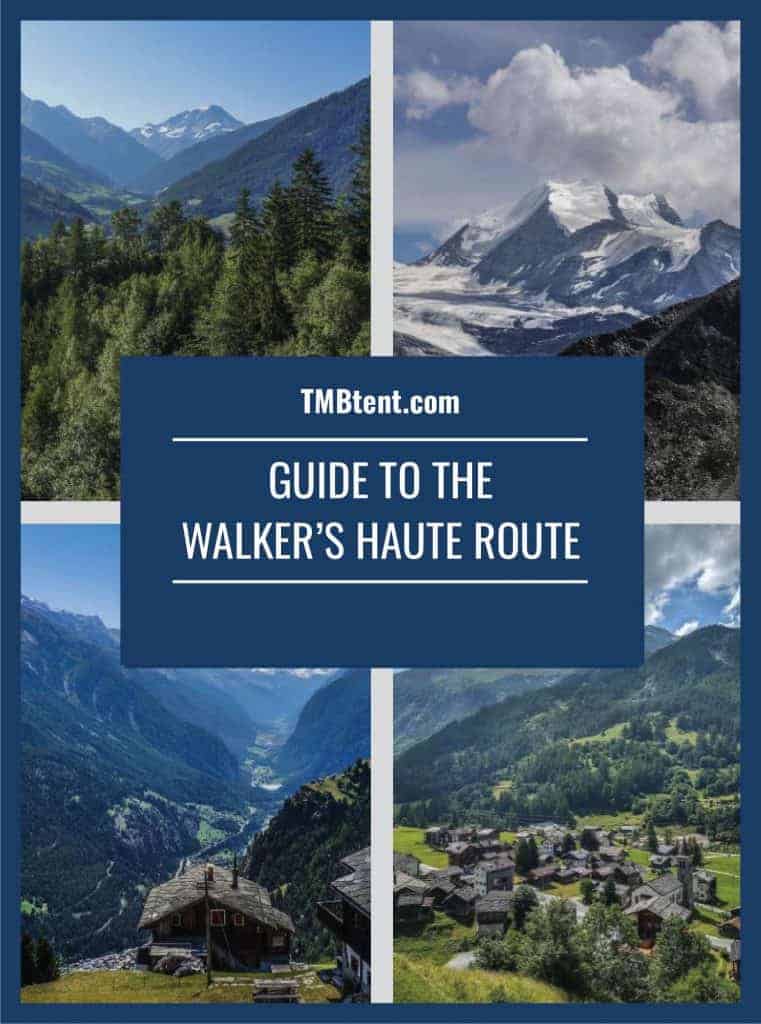 Where is the Walker’s Haute Route?

The trek crosses no fewer than eleven mountain passes (Col de Balme, Fenetre d’Arpette, Col de Louvie, Col de Prafleuri, Col des Roux, Pas de Chevres, Col du Tsate, Col de Sorebois, Forcletta, and Augstbordpass) passes through many quaint mountain villages, and stops at breathtaking alpine refuges. For many, the route finishes with two days on the famous Europaweg trail as you make your way to Zermatt. The walk is typically completed in 13 stages, although plenty of options exist to extend or reduce your time on the route. The stages of the traditional Walker’s Haute Route are as follows:

As discussed above, the Walker’s Haute Route includes several ‘alternates’ in addition to the traditional trail shown above. These alternate trails typically connect the same start and finish points, but take walkers on a different route between the two points. There are also variant routes that allow trekkers to shorten or lengthen their trek depending on their desired level of difficult and time on the trail.

The alternate routes can be used to add challenge, visit nearby villages, avoid certain sections, or provide a low-level route in the case of bad weather. Additionally, there is an alternate route that allows trekkers to add a day to the Haute Route by spending a night at the Hotel Weisshorn.

Here are the common alternate routes on the Walker’s Haute Route, which are also shown on the map below:

The interactive Walker’s Haute Route map below will allow you to zoom in on the various stages as well as view the traditional stops along the route. The map also displays the common alternate routes that are a part of the Walker’s Haute Route, and described above. You can click on each stage to see the total length, listed in both kilometers and miles.

How long is the Walker’s Haute Route?

The Walker’s Haute Route is approximately 128 miles or 207 kilometers long. This is based on following the traditional route described above and not taking any of the alternate routes. Of course, many trekkers will opt to take several of the alternate routes, which will lengthen or shorten the total distance, depending on the routes chosen. You’ll have the option to walk less or more depending on the weather, your preferences, and the conditions encountered on the trail.

The maps below show the approximate distance of each stage in both miles and kilometers, giving you a sense of the distances encountered on each section of the Walker’s Haute Route. For more detail on each stage be sure to check out our interactive map in the section above!

What is the elevation profile of the Walker’s Haute Route?

Of course, the elevation gain and loss isn’t spread out evenly from stage to stage. You’ll have days with a tremendous amount of climbing and you’ll also have days with much less (although always some!). Given that the Walker’s Haute Route is a point to point trail (meaning it does not start and finish in the same location) you’ll gain a tad more elevation that you’ll gain over the course of the entire route.

The elevation profiles below, displayed in both imperial and metric units, will give you an overview of what each stage of the Walker’s Haute Route is like in terms of total elevation change and distance. Elevation is shown on the left side while distance is shown on the bottom. Each blue dot represents a stop along the traditional 13-stage Walker’s Haute Route, with the stop name shown at the top.

When thinking about how many days or stages you’ll take to complete the Walker’s Haute Route be sure to reference these elevation profiles. They’ll give you a sense of how hard each day is and will let you see which stages may make sense to combine.

What maps should I carry on the Walker’s Haute Route?

Carrying a good map is essential on the Walker’s Haute Route. While the trail is generally well-marked and easy to follow, there are countless trail junctions, detours, and confusing sections that require some form of navigation.

When we hiked the Walker’s Haute Route we did not rely on traditional, paper maps that are available for the route. Instead, we preferred utilizing GPS maps on our phones to ensure we knew where the trail was as well as where we were in relation to it. Cell phone service is very limited along the route, so it is critical to have a good offline mapping app such as Gaia GPS to ensure you’ll be able to view the map at any point along the route.

With all this considered, we still recommend carrying a paper map, or map booklet. While technology has done a tremendous amount to make navigating while hiking easier, there is simply no replacement for carrying a physical map with you. If your phone runs out of battery you’ll be glad you had your handy paper map to rely on.

To cover the entire Walker’s Haute Route at a good scale (1:50,000) we recommend bringing the following Swiss Topo maps:

You can purchase all of these maps on the Swiss Topo website here. In addition, Swiss Topo also has hiking maps at a larger scale (1:33,000), although it would be quite cumbersome to carry maps to cover the entire Walker’s Haute Route at that scale.

A weatherproof carrying case like this one wouldn’t hurt to have either.

If you’re interested in getting access to the GPS data used to create all of the maps in this post, we are happy to offer our Walker’s Haute Route GPX files for only $4.99. When you download the GPX file, you’ll get route data for each of the traditional stages of the Walker’s Haute Route as well as all of the common alternate route, plus waypoints for each stop along the way. 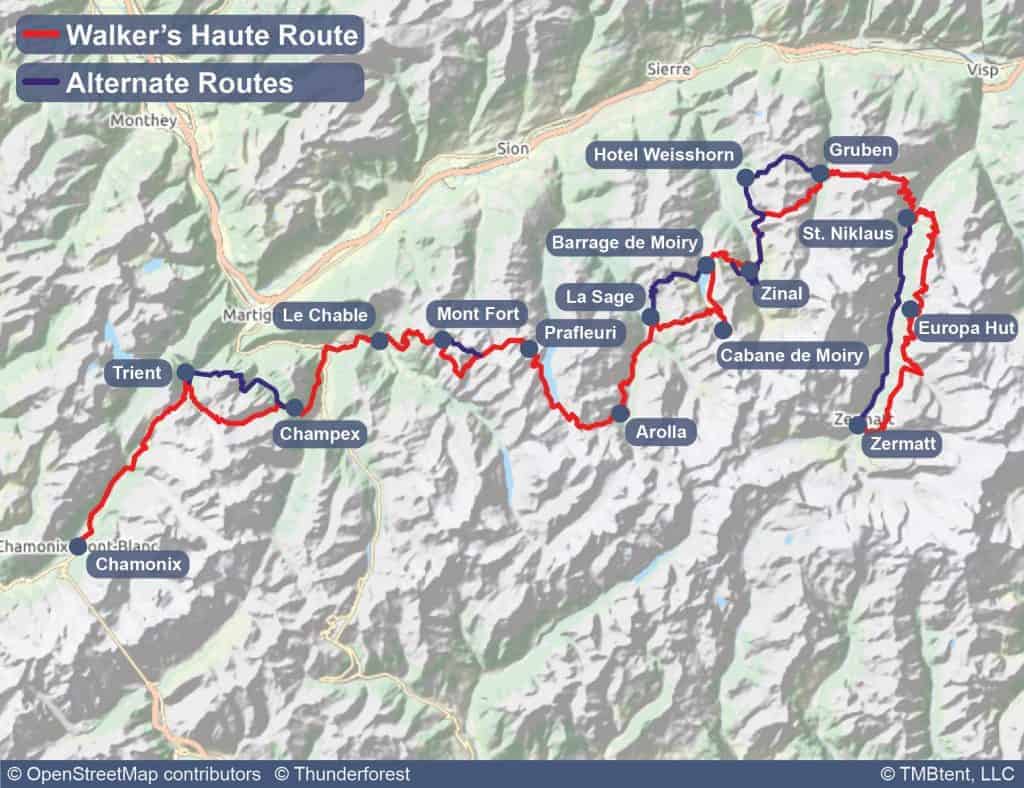 As mentioned above we utilized offline downloadable GPS maps on our smartphones to navigate while hiking the Walker’s Haute Route. This is a great way to navigate on the trail as it allows you to see your progress for the day and also doesn’t require a cell phone signal (which you likely won’t have) to display the map. Our Walker’s Haute Route Offline Mapping post has all the information you need to get set up using an app for your map. This step-by-step article will teach you how to quickly and easily turn your phone into a GPS device.

Ready to keep planning for a perfect Walker’s Haute Route adventure? Be sure to check out all of our great content below:

1. Rumpl Puffy Blanket - The coziest camp blanket out there.

2. Solo Stove - Elevate your campfire with this smoke-free fire pit.

3. Solar Power Bank Charger - Keep your gadgets charged with the power of the sun.

Take Control of Your Route Planning

Learn how to plan your route, create GPS files, navigate offline, and even print you own maps.